Mark Zuckerberg, founder and CEO of Facebook, the social networking platform widely credited with transforming how almost 1.9 billion people interact, will be the featured speaker at the Afternoon Program of Harvard’s 366th Commencement on May 25.

“Mark Zuckerberg’s leadership has profoundly altered the nature of social engagement worldwide. Few inventions in modern times can rival Facebook in its far-reaching impact on how people around the globe interact with one another,” said Harvard President Drew Faust. “And few individuals can rival Mark Zuckerberg in his drive to change our world through the innovative use of technology, as well as his commitment to advance science, enhance education, and expand opportunity through the pursuit of philanthropy.

Born in White Plains, N.Y., in 1984, Zuckerberg grew up in nearby Dobbs Ferry. By the time he was in middle school he was already writing software, including a program called “ZuckNet” which he created for his father’s dental practice. Later, still a teenager, he built a platform called Synapse Media Player that used machine learning to analyze a user’s listening preferences. The program was recognized by PC Magazine and earned him job offers from Microsoft and AOL.

Zuckerberg went on to graduate from Phillips Exeter Academy in New Hampshire, where he combined his talents for math and science with interests in classics and fencing.

He enrolled in Harvard College in 2002 as a member of the Class of 2006. While he was a sophomore in Kirkland House, he and a group of friends created a platform called thefacebook.com, initially designed as a social networking website for Harvard students and then expanded to other campuses. The website quickly gained widespread popularity, catching the attention of investors. Following his sophomore year, Zuckerberg and his cohorts moved to Palo Alto, Calif., to rebrand their fledgling company, now called Facebook, as a global service. Zuckerberg originally intended to return to Harvard, but the immediate success of the enterprise led him to devote his full energy to the company.

As the popularity of the network grew, it was expanded to universities outside the United States, and in 2006 was extended beyond educational institutions to anyone with a registered email address. Since then, Facebook has grown to become the top social media platform.

Zuckerberg has also emerged as a major philanthropist, having pledged to direct tens of billions of dollars to a range of causes. Over their lifetimes, he and his wife, Priscilla Chan, a pediatrician and 2007 Harvard College graduate, have pledged to donate 99 percent of their Facebook shares through the Chan Zuckerberg Initiative (CZI), which is committed to advancing human potential and promoting equal opportunity. Through their work with CZI, they have pledged to spend more than $3 billion over the next decade to work with scientists, doctors, engineers, and universities to cure, prevent, or manage diseases.

They have focused on bringing the power of personalized learning to students across the country and are working with governments and other policymakers to accomplish these ambitious goals. Zuckerberg and Chan’s philanthropy has also included donations to schools and educational organizations across the Bay Area, San Francisco General Hospital, and the Centers for Disease Control.

“Mark Zuckerberg understands the power of connection, and the importance of creating community,” said Martin Grasso, president of the Harvard Alumni Association. “Harvard alumni and students will be eager for this opportunity to hear from someone who through hard work and dedication has transformed the way we connect to each other and the world.”

Create a sense of purpose for all, Zuckerberg urges

He dropped out of College to chase a dream and returned 12 years later as leader of a company that has changed the world. His goal now, he says, is to make that world become a better place in which to live, work, laugh, love, and connect, and to encourage others to do the same.

After receiving an honorary degree Thursday morning, Facebook co-founder and CEO Mark Zuckerberg stood again in front of Memorial Church in Tercentenary Theatre during the afternoon and urged newly minted Harvard graduates to go out into life and make a difference, with purpose.

“Today I want to talk about purpose,” he said. “But I’m not here to give you the standard Commencement about finding your purpose. We’re millennials. We try to do that instinctively. Instead, I’m here to tell you that finding your purpose isn’t enough. The challenge for our generation is to create a world where everyone has a sense of purpose.

That’s a critical goal in a time of everyday change, said Zuckerberg. Increasing automation means the loss of jobs that had helped a generation find its voice and frame its values. Similarly, community connections, which also helped connect and define prior generations of Americans, are slowly slipping away, often leaving people bereft of meaning and paths forward.

“A lot of people are feeling disconnected and depressed, and are trying to fill a void in their lives,” he said.

Zuckerberg outlined three ways that Harvard graduates and others can help foster a world where everyone has a sense of purpose. First, he suggested big projects that get lots of people involved.

In past generations, hundreds of thousands of people worked to put a man on the moon, and millions volunteered to help immunize children against polio. The world needs more thinkers and doers who can tackle similar, present-day challenges, said Zuckerberg.

“It is time for our generation-defining great works. How about stopping climate change before we destroy the planet, and getting millions of people involved in manufacturing and installing solar panels? How about curing all diseases and getting people involved by asking volunteers to track their health data and share their genomes? … How about modernizing democracy so everyone can vote online, and how about personalizing education so everyone can learn?”

The second pillar of his plan involves helping people gain equal opportunities to succeed and find their purpose, through donations of money and time, because “when more people can turn their dreams into something great, we’re all better for it.”

His third path to purpose, unsurprisingly, involves a concept he knows something about: building community. 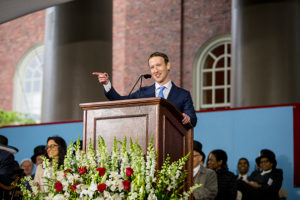 From Kirkland House to Palo Alto

Similar to Bill Gates, another Harvard dropout turned tech billionaire, Zuckerberg, an entering member of the Class of 2006, left Cambridge in the fall of 2005 for Silicon Valley and never looked back. In Palo Alto, Calif., the young computer whiz transformed the company he had created with his roommates in his Kirkland House dorm room less than a year earlier into a revolutionary social media platform that has fundamentally reshaped how people connect with each other globally. Early in his talk, Zuckerberg poked fun at his Harvard track record.

“I’m honored to be with here you today because, let’s face it, you accomplished something I never could. If I get through this speech today, it’ll be the first time I actually finish something here at Harvard.”

Zuckerberg also reminisced about his time at Harvard and his best memory, meeting another undergraduate at a going-away party in his honor. He said his College friends (and his parents) were certain he was about to be thrown out of Harvard for his actions in founding the precursor to Facebook, facemash.com, a controversial website that let people rate the attractiveness of fellow undergrads.

The situation drew the ire of administrators and classmates, but also brought him to that party to meet his future wife, Priscilla Chan ’07, “the most important person in my life.”

“We have all started lifelong friendships here, and some of us even families. That’s why I’m so grateful to this place. Thanks, Harvard.”

At Facebook, Zuckerberg became the youngest self-made billionaire in history at age 23, overseeing a company that today lets close to 2 billion users share everything from baby pictures and birthday wishes to favorite recipes and political views.

In recent years, he has dedicated more attention, and his fortune, to philanthropy. With Chan, he created the Chan Zuckerberg Initiative in 2015, backed by a promise to devote 99 percent of their earnings from Facebook stock shares to fund the organization’s mission of curing disease and promoting education. 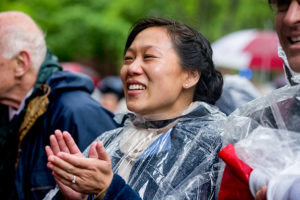