Last Saturday Elon Musk’s SpaceX launched its new capsule called Crew Dragon to the International Space Station(ISS). This is the first American-made crew spacecraft. This successful launch made SpaceX one step closer to send two astronauts to the ISS this summer. It also symbolizes the end of Russia’s ruling position in the space race. 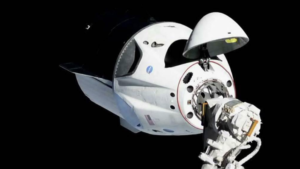 It’s undeniable that Elon Musk is an innovation genius. In fact, he is an innovation behemoth. No-one in this century is even comparable to his successes. Bill Gate created Microsoft, which lead us to a new computer era; Steve Job funded Apple, which opened the door to the microcomputer revolution. Elon Musk not only created SpaceX, he also created Tesla, an American automotive and energy company; PayPal, a money-transfer service company; The Boring Company, which builds underground tunnel networks; Neuralink, a neuro- technology company which develops implantable brain-computer interfaces. The accomplishments Elon Musk has achieved so far are remarkable and astonishing. I think his successes are all attributed to his visions for the universe exploration, his determination for the automobile renovation, and his ideas for making the world a better place.

What I admire Elon Musk most is his courage. After he had his billions, He didn’t simply sit on his billion dollar’s cushion like some billion dollar club members. He continues to pursuit new adventures, continues to take risks to move the world forward no matter how many falls he has tumbled along the road. He is brave. He is strong. He has a talent for words too. His twitters are interesting. His quotes are inspiring. He also has a writer’s sensitivities for the feelings. I remember he once talked about his loneliness: “…being in a big empty house and the footsteps echoing through the hallway…..”. How good his description is!

Someone said Elon Musk is a god-send. Elon Musk himself said he is self-made iron man. Go Elon Musk, go!