Today, Boris Johnson officially becomes Britain’s new prime minister. Strangely, after his appointment, there is no reported celebration and happy emotion across Britain. Are people feeling numbed to the news? indeed; Disappointed? Probably yes. I cannot believe Great Britain, where I have worked and lived more than 6 six years of my life, now becomes a world stage for the comic shows. The shows, which are led by Trump-like Johnson and pretentious Duchess, become more and more ridiculous each day. What happened to the one of the greatest country in the world? How can a person who makes the loudest noise, who cannot even manage his hair, lead the country? Why let the person, who spend extravagantly, preach shamelessly to the poor, and disgustingly write a message on banana for sex workers? Power and status, once they are controlled by those hypocrites, can be absurd institutions to betray our trust, and test our patience and believe. I really hope those comic shows by those two are short lived, and hope British people can find a way to make their country a truly leading country in the world. 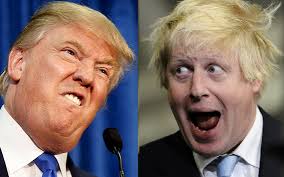