Many stories from the movie Forrest Gump proves my point. Forrest Gump is a slow, but very kind man. His life story is the tale of “Stupid is as stupid does”. Forrest Gump faces so many challenges throughout his life, but he never let any of them stop him pursuing his dream and happiness. Forres Gump believes good things will happen. He believe each setback is a good opportunity. 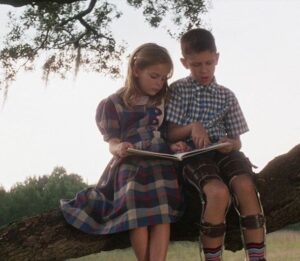 Forrest Gump loves his childhood sweetheart Jenny, who has messed up her adult life with drug and alcohol. Every-time Forres Gump shows his love for her, she walks away from him. But this never stop Forrest loving her and caring for her. His love for Jenny looks so stupid in other people’s eyes, but Forrest knows love is a source of strength to his life. He lives for love. In the end, they are married. They have a son, also named Forrest Gump. His life carries on. 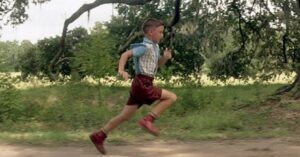 Forrest Gump is always bullied at school because he looks and acts stupidly. Whenever this happens, his childhood sweetheart Jenny tells him to run, run as fast as he can. Running builds his strong character. It also win him a football scholarship. He makes a lemon to lemonade. 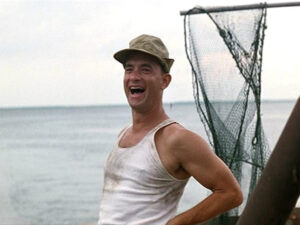 After his college graduation, he enlists in the army and is sent to Vietnam, where he makes friends with a black man named Bubba, who convinces Forrest to go into the shrimping business with him when the war is over. Later while on patrol, Forrest’s platoon is attacked. Though Forrest Gump run to his safety, but out of everybody’s surprise, he run back to rescues many of the men including Bubba. In the end, Bubba is killed, Forrest Gump is injured. His selflessness looks so stupid speaking for the life and death decision, but Forrest win a medal for his heroism. And his friendship with Bubba inspires him to become a shrimp ship captain, which makes him a millionaire later on. Again, a tale of “Stupid is as stupid does”. Look what those “stupidity” lead to? 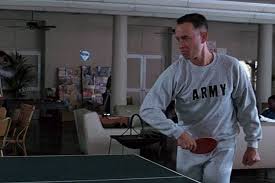 While Forrest is in recovery, he discovers his talent for ping-pong. His nonstop playing looks so silly. But guess what? He eventually win a ping-pong championship.

One day, Jenny returns to visit Forrest and he proposes marriage to her. She declines, although she sleeps with him that night. She leaves early the next morning. Feeling lost without her, Forrest decides to run across the country. He keeps running several times, over some three and a half years. This craziness looks so stupid, but his single-minded running inspires so many people around country. He becomes a national hero.

Forrest Gump said: “I don’t know if we each have a destiny, or if we’re all just floating around accidental-like on a breeze. But I, I think maybe it’s both”.

We all don’t know where each our action eventually leads to. Like Forrest Gump, if we do everything with good will and faith, an unexplainable super-power will be at our side.