In May, my family took a two weeks’ vacation in Italy. We first flied to Venice from home, and stayed in Venice for two nights. Then we took trains from Venice to Florence for three nights there. During our staying in Florence, we also went to Pisa to see famous Pisa Tower.  Later, we left Florence by train to Rome. After stayed in Rome for 5 days, we headed further south to Naples for two nights. We based in Naples and took separated day trips to Amalfi Coast, Pompeii and Sorrento. Following is our train journey.

Venice is a very unique city, the city of floating maze, the city of canals and bridges. If this is your first time there without GPS at hands, I am sure you will get lost in this beautiful city. No matter where you go in the city, no matter what you see in the city, you feel you are in a movie setting, instead of real life.

Florence is noted for its culture, Renaissance art and architecture and monuments. The city also contains numerous museums and art galleries. I am most impressed by its famous bridge and its beautiful park at the top of the mountain cross the river. When you are in Florence, market is a place to try city’s various cuisines.

When you visit Florence, don’t forget to take a day trip by train to the nearby city Pisa. Pisa is famous for its Pisa Tower, which is the historical architect mistake, but it becomes a huge tourist attraction instead. When you walk a circle around leaning tower, you can find that the leaning degree of the tower is different. It’s funny to see that so many people trying to “push” the leaning tower back with their arms in their photo. In reality, there are kind of efforts to fix the leaning tower there. You can see they add some cement reinforcement at top top the tower o protect the leaning tower further leaning. Who knows if the tower will eventually collapse in future because of design mistake. Besides the leaning tower, there are other well known cathedral and historical buildings there too. 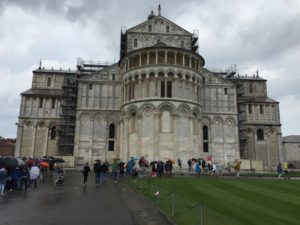 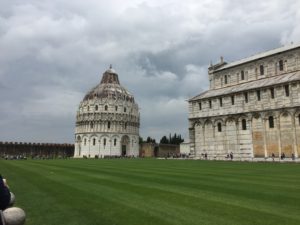 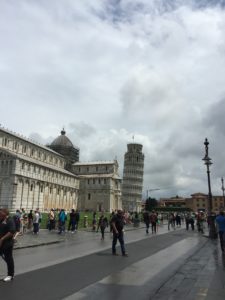 Tip. You don’t need to reserve your tickets for the leaning tower online. There aren’t many people lining up for the ticket when you get there in the late morning or afternoon.

Rome is the city full of history. Every street and every corner you go, there is a historical building and interesting story behind it. The city was built to maximum protect the Rome History. There are no single skyscraper there. All they have are original buildings, churches and  ancient ruins. Colosseum and Forum are well preserved Ancient Rome. You cannot believe in the 21 century, Italy still persistently keep those century old ruins in the central core of the city. It’s not because they don’t want to move on, it’s because those ancient ruins are their pride.

Tip: 1 You don’t need to reserve your tickets online for Colosseum and Roman Forum. There is a very short line (10 minutes of waiting) at Palatine Hill entry. 2. The same as to the online booking for the Vatican Museum. Just line up there,  don’t believe you have to wait for 2-3 hours to get into the museum. When we were there, there were at least 600-800 people line up there before us, but we get into the Museum in about a half hour.

Italy is not only famous for its history, it’s also well known for its beautiful coastlines. We are so lucky to have the opportunity to visit Amalfi coastline at the end of our vacation. To get to Amalfi coast is a scary experience. We took a bus run by Site company from Sorrento to Amalfi coast. We didn’t prepare how dangerous the bus route is. It basically run on the top of hundreds meter deep cliffs. And the route are so narrow for two ways traffic. And the route has so many unexpected turns. It’s was a such a memorable experience. In the end, the beautiful Amalfi coastline is well worth the risk.

Pompeii is the city well known for its ruins caused by nearby destructive volcano. We didn’t have much time to spend time inside the enclosed site, but the look from the outside already tells how devastated the city had been.experienced.

Sorrento is a beautiful seaside town. It can be easily reached by a subway kind of train from Pompeii or Naples. The city is dotted with antique shops scattering along the narrow streets. However, there is no public beach for the tourists except beaches owned by private hotel or business.